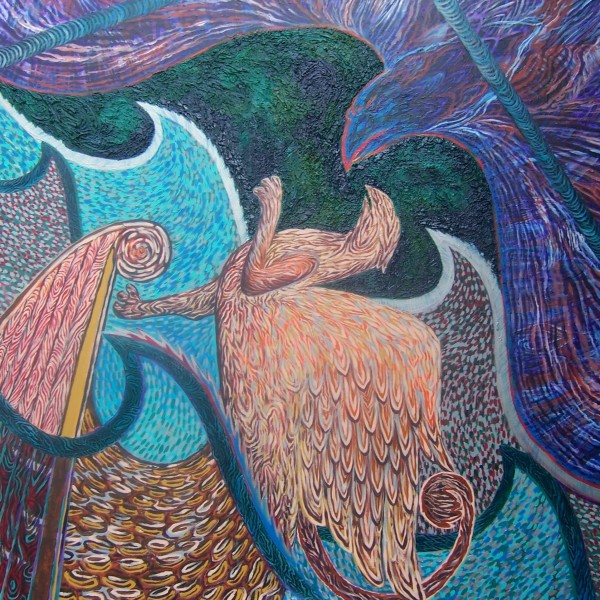 Patricia Opel and Timothy Norris: “The Griffon the Thunderbird”

In 1679, French explorer and fur trader Robert de la Salle ordered the construction of the Griffon, a sixty-foot vessel complete with a handsomely carved figurehead of the mythical beast, for transporting Great Lakes furs to eastern ports. He also planned to sail the Griffon further west in search of the fabled “northwest passage” to the orient and still more lucrative global trading opportunities. But la Salle’s grand schemes quickly unraveled. In September 1679, he led a contingent of men on foot across southern Michigan to eventually reunite back east with the fur-leaden Griffon. They soon became mired in swamps and plagued by huge swarms of mosquitoes. Meanwhile, the Griffon sailed out of Green Bay and into oblivion. It sank somewhere in Lake Michigan in a surprise autumn storm, thus becoming the first documented non-native shipwreck of the Great Lakes. In our painting, the European mythical creature is no match for its Ojibwa tribal counterpart.